IN CONVERSATION WITH MATTHIEU POIRIER

On the 28th of April 2017, Panoptès held a conversation between artist Ann Veronica Janssens and art historian, and curator, Matthieu Poirier.

Coinciding with Ann Veronica’s large-scale solo exhibition at the Institut d’Art Contemporain of Villeurbane, this conversation was a great opportunity to delve into the artist’s practice and to consider her experiments in perception and human consciousness in the larger context of the history of abstraction and the concurrent development of perceptual art.

At the core of Janssens’ practice is a fascination with the idea that the experience of seeing and of perceiving our external environment, is fundamentally an inner process. We are the architects of our own vision, we give rise to the experience of light, movement, space and colour – and such experience vary constantly from one moment to the next, and from one person to another. Through minimal gestures and simple technical apparatuses, Janssens’ work operates subtle disruptions, almost imperceptible, that heighten and expand the viewer’s awareness of perception. The tension between the simplicity of sensible physical facts (phenomena), and the complexity of their effects, as Poirier underlined, is at the core of her body of work. Looking at it within the context of the artist’s own constellation of references, as well as within the larger context of perceptual art, provided some insightful elements of understanding.

Asked what could have been a seminal moment or influence in her work, Janssens recalled her experience of Light and Space as well as long hours spent in museums of African art during her childhood in Kinshasa in the Democratic Republic of the Congo. Architecture, and her early intimate experience of space, not yet formalised by the influence of other artists, was a pivotal element that will come to inform her artistic practice throughout her career. This is particularly the case in Janssens’ immersive approach to sculpture as environments. In fact, the architectural quality of her installations offers a space of experimentation, and perturbation, which the viewer can penetrate. African art, on the other hand, with its paring down of the visible world to essential and yet simple forms combined with a concentration of layers of meaning, retains an essentialist quality that underlies Janssens’ work.

In her work, physical phenomena such as light, colour, sound or mist are presented to the viewer in their simplest forms. Poirier notes that, as Bridget Riley said in 1965 and James Turrell in the 1970s, ‘perception is the medium’. Moving away from the commonly understood categories of medium such as oil painting, bronze or marble, here the idea is that psychophysiological perception becomes the medium. Looking at early pieces such as Donuts or Martin Mac 2000 which played upon the phenomenon of retinal persistence in relation to later works including the disorienting chromatic mist sculptures – and more recently the Magic Mirrors – it is the experience and perception of space, vision, light, colour and space that is at stake. In this discussion about ‘the physiological tool’, Poirier and Janssens evoked the Laboratoire Espace Cerveau, co-founded by the artist herself with Nathalie Ergino in 2009, and conceived as an exploratory field study around perception.

Although always retaining a form of simplicity in the apparatuses used in her work, Janssens often draws on recent developments in science and new technologies to observe and make visible phenomena that are almost or completely invisible. Asked what led her to this ‘molecularization of the visible’, this effort to penetrate matter and light, she recalled one specific installation in the Cabinet en Croissance (Villeurbanne), the mist room – a sort of copy machine of the cosmos. Each time a nuclear particle goes through the liquid of the machine, it manifests itself like a pulverisation on its surface, which varies depending on the light. It is an invitation to look straight into matter to the point of merely retaining the experience of it. The intervention here, as Poirier noted, is to both make visible and make disappear. Alteration, and concentration on a certain awareness of physical phenomena, become a tool.

Co-curator of the seminal exhibition Dynamo (Galeries Nationales du Grand Palais, Paris, 2013), Matthieu Poirier has curated shows and written extensively about abstract and perceptual art in the 20th century and its legacy on contemporary practices. The relationship between space, light, vision and movement is at the core of his inquiry into the work of artists like Jesus Rafael Soto, Carlos Cruz-Diez, Francisco Sobrino and Julio Le Parc. Ann Veronica Janssens and Matthieu Poirier worked closely on the exhibitions Dynamo (Paris, 2013) and Spectres (São Paulo, 2014). 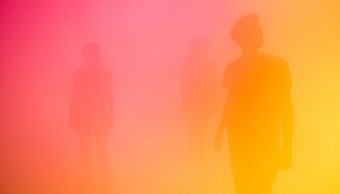 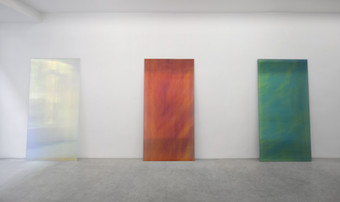 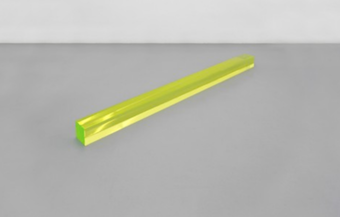