A pioneer of abstract art, Jean Arp was instrumental in founding Dada and actively participated in the propelling of Surrealism and Constructivism. Born in Strasbourg, Arp studied at the Kunstschule in Weimar and at the Académie Julian in Paris. In 1909, he moved to Switzerland, where he founded Der Moderne Bund (The Modern Alliance) Group, a primarily Swiss group of modernist painters which also included Paul Klee. After returning to Paris in 1914, where he met Guillaume Apollinaire, Max Jacob, Amadeo Modigliani, and Pablo Picasso, Arp moved to Zurich where he joined the Dada movement. In 1922, he participated in the Kongress der Konstruktivisten in Weimar. From 1931, he was associated with the Paris-based group Abstraction-Création.

After devoting himself to relief sculpture throughout his Dada and Surrealist years, Arp started to transform the flat, biomorphic shapes of his earlier reliefs into fully fledged sculptures. Although he developed a highly abstract visual vocabulary, in his sculptures Arp always establishes a connection with elements of the natural world in such a way as to unveil the mysterious and poetic elements hidden in everyday forms. Jean Arp’s biomorphic sculptures greatly inspired Joan Miro and proved to be hugely influential to later 20th century abstract artists. 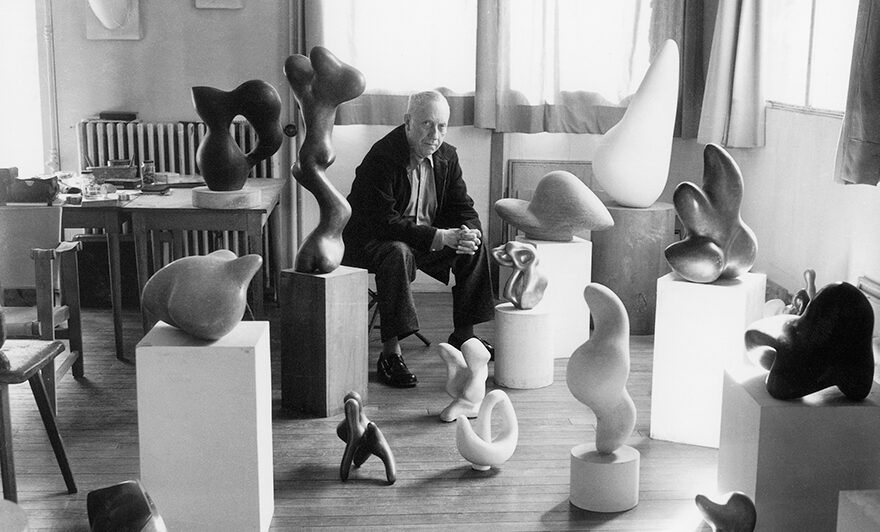