Born in 1928 in Hartford, Connecticut, Sol LeWitt is considered one of the pioneers of the Minimalist and Conceptual movements that developed in the United States in the 1960s.

Trained in Fine Arts at Syracuse University, then at the New York Cartoonists and Illustrators School – now the New York School of Visual Arts, Sol LeWitt joined I.M. Pei architecture firm as a graphic designer right out of college. At the same time, he worked as a receptionist at the Museum of Modern Art, where he notably met artists Robert Ryman, Dan Flavin, Robert Mangold and art critic Lucy R. Lippard.

In 1962, LeWitt realized his first sculptures in a constructivist style. A style from which he quickly moved away to concentrate on the two forms that would inhabit his oeuvre from the second half of the 1960s to 2007: the square and the cube.

Through his “structures” (term that the artist uses to define his sculptures), Sol LeWitt sets up a formal vocabulary allowing him to appropriate the notion of rational logic. Particularly emblematic of this approach, the Incomplete Open Cubes demonstrate an artistic technique integral to post-war and contemporary art: seriality. Generally speaking, serial art is generated through the application of premeditated rules or plans. In this case, LeWitt systematically explored the 122 ways of « not making a cube, all the ways of the cube not being complete, » per the artist. 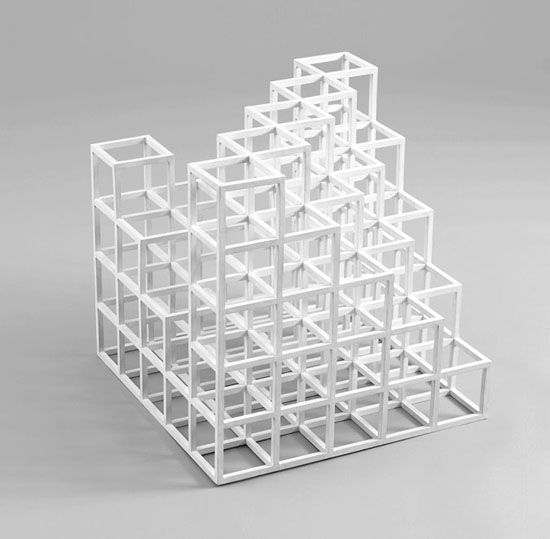