In February 2018, Panoptès was happy to host a second philosophy workshop for children from 8 to 12 years old. Held by Pamela Severin, artistic director of the Children’s Museum in Brussels, and following the opening of the exhibition dedicated to Joachim Olender’s commissioned work for Panoptès, it revolved around the concept of « party ».

After watching Olender’s rather enigmatic video Artifices (2016), we asked the children what spontaneously came to mind and, providing the artist wanted to tell a story, what the latter could be. We wondered if there was one landmark moment in the film and tried to put it in a nutshell – to conceptualize it. Starting by the nature of the very depicted party – is it a common, or rather particular? – we raised the question of what is “a party” and what it means “to party”.

The children were then invited to sit at party table, as guests. Among different objects placed on the table, they were asked to designate the one that, to them, evoked a party the most – or the least. They were then asked to descript it or to draw it, and to explain what the very object said about the party. Under the objects were hidden questions inviting them to argue and develop their critical sense. For example, under a bag of sweets was the question “Is the holiday season good for the health?”.

After the group had synthetized what had been said, the children met with Joachim Olender and shared with him the works they liked most and argued. Indeed, if some agreed that his photographs resembled poems, others rather underlined their mysteriousness or their joyfulness. Seating together in a circle, Pamela then orchestrated an insightful Q & A session.

Finally, the children were asked to exercise their own creativity and to blow into straws so as to burst paint and create a firework tailored to a particular event or one precise moment in an event that inspired them (a birthday, a departure, a wedding, etc.). Around the opposition hidden/seen, and with the help of foam paper, they superposed a meaning to what their breath had initiated. Just like in Olender’s photographic work, in which the artificers, having named their flowers and bouquets, revealed their very own script. 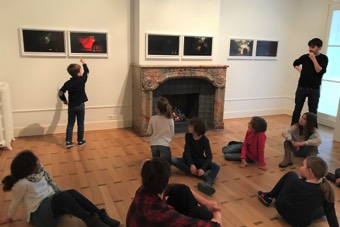 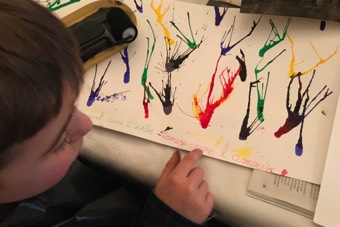 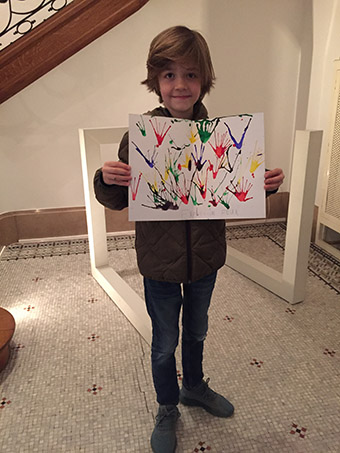